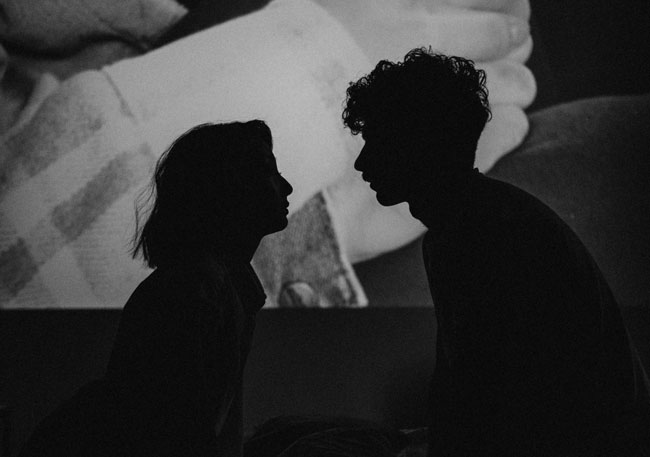 Most people who aspire to become actors want the job because of the wealth and fame that comes with it. And although there’s nothing inherently wrong with wanting those things, having those as your primary motivations isn’t going to help you keep persisting in this highly competitive field. You need real passion and love for the craft to keep trying even through stretches of time full of failure and self doubt.

The greatest actors we see on the big screen have gone through the struggles that all aspiring artists face and didn’t quit. They were driven by passion.

Following is a list of gift ideas for actors. We bring you some creative gifts you can give to the struggling actors in your life. Pick one you think best suits your recipient. 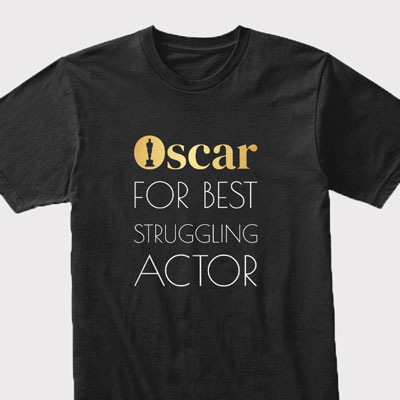 The drive to win awards shouldn’t be the primary motivator for an artist. You shouldn’t base your artistic choices on the kind of work that gets rewarded with accolades. That’s not to say that they’re worthless. After all there’s a benefit to having some prestigious awards under your belt. In the least they give you credibility in the eyes of important people in your field.

A gift like this t-shirt is perfect for a struggling actor who has yet to win anything official. It lets them know you appreciate their talents and believe in them. And while it won’t compare with the real thing as far as your relationship with them is concerned they’ll know you see them as a winner, which will mean a lot for those who need that support. 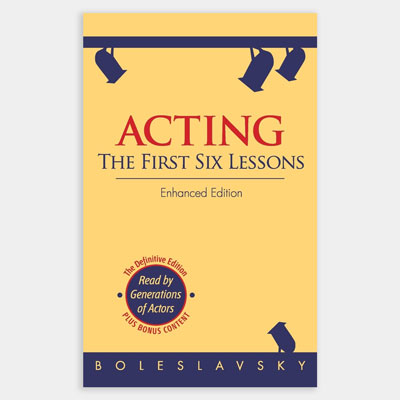 My general suggestion when it comes to giving books related to someone’s vocation is that you should avoid it. You’re likely to give them a book they already own or something they have no interest in reading. In either of those cases your gift will fall flat and won’t impress them.

This book is a classic manual for actors. Any actor who is serious about their craft should give it a read. If you know for a fact (You can just ask them in passing if you don’t.) that they don’t own a copy and if they enjoy reading you can give them this great book. They’ll appreciate the introduction. 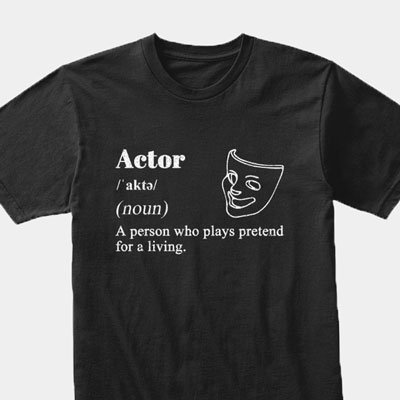 Life is hard for everyone . One way to deal with all this harshness is to have a sense of humor about ourselves. You need to learn how to take a joke. And while sometimes you do need to stand up for yourself against someone whose intention is to put you down you still have to learn to recognize the difference between a harmful joke and a harmless one.

Being an actor is much more than pretending to be someone. It requires a lot of taxing emotional work. Yet the joke trivializing the job is funny. It’s a bit silly but works on this well designed t-shirt. Gift it to a friend with a sense of humor. 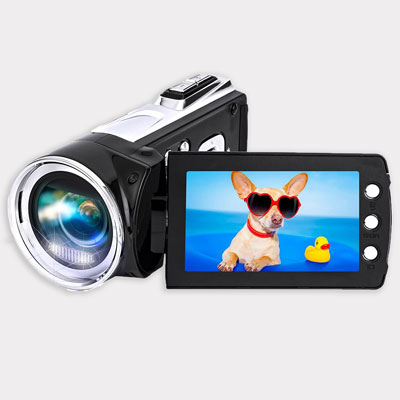 Mastering any skill requires practice, and a lot of it, but just countless hours put into doing something over and over again isn’t enough. You have to get feedback and make the necessary adjustments. Trial and error is how you learn but you have to be aware of the errors to improve.

Actors do this by practicing in front of the mirror. You run your lines and see your reflection in real time. That has worked out for many great actors in the past and continues to do so but this method has a shortcoming. When you’re acting you’re focused on doing so and have only so much attention left to notice everything that you do.

It’s the twenty first century and you can now use technology to do it even better. Video cameras don’t just make useful gifts for filmmakers but anyone who can put them to good use. With a camcorder like this your recipient could record their practice sessions to study themselves in the process. They’ll find it useful and hence it’ll make a fine gift. Just let them know the thought process behind this. 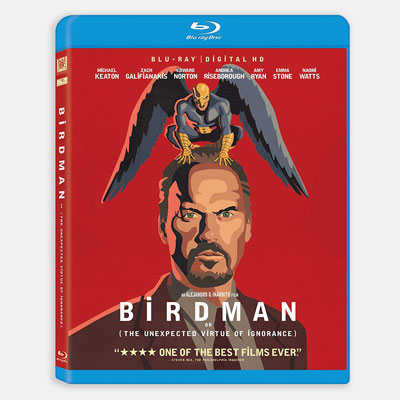 A film about an washed up actor trying to get his past glory back and adapt to the times is something that would interest any struggling actor. Birdman is a surreal story of a person dealing with the struggles of the acting life.

In the age of streaming you get to watch almost any film you want a few clicks away. There’s not many people who buy DVDs and Blu-rays, so if your recipient is an old fashioned film buff who refuses to use services which they perceive to be the downfall of an industry this Blu-ray will be a fine gift for them. 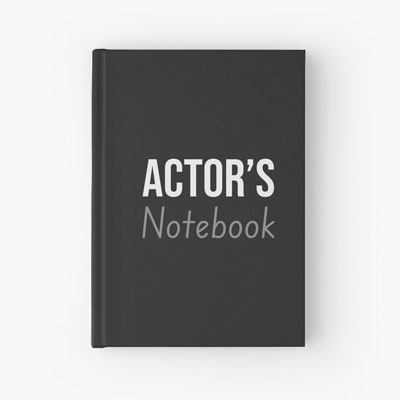 Actor's Notebook, a Journal for Actors to Write Down Their Ideas - Redbubble.com View on Redbubble

Custom notebooks make ideal gifts for writers. Most people instinctively think of them when brainstorming gift ideas for the scribblers in their lives. But apart from aspiring writer and students not many recipients get notebooks and diaries as gifts.

People in many creative fields are used to jotting down their ideas on paper. After all ideas, when they choose to appear, tend to vanish as quickly as they come. This journal will make a fine gift for any actor with such a habit. They’ll find it useful and charming.

On Acting by Sanford Meisner 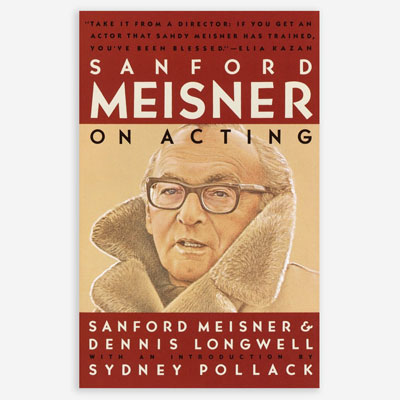 Ask any veteran actor to suggest you a handful of books on the artform and On Acting by Sanford Meisner will likely be on the list. It’s a classic guide with valuable insight on the craft. A must read for any actor trying to hone their skills.

If your recipient is someone who enjoys learning from reading books they’ll like your gift, if they don’t pick something else that fits their temperament. 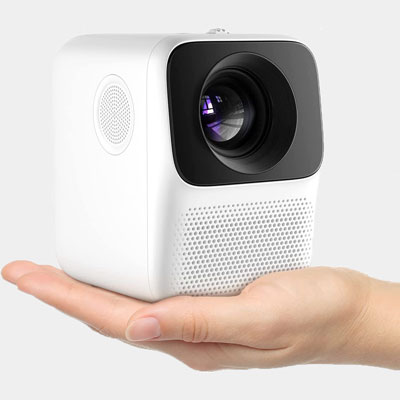 It used to be that you had to go to a movie theater to buy tickets and watch a film. It was a unique experience–watching moving pictures on a big screen in a room filled with others who are there to do the same.

Times have changed. Nowadays you can watch almost any film you want anywhere, anytime and it’s only a few clicks away. But all that convenience can’t replace the pleasure of watching a movie on a big screen.

Using this projector might not be the same as watching a film in a theater but it’s a much better experience than watching one on a smartphone. It’s compact so can be carried anywhere with ease. You can gift this to an actor, filmmaker or anyone who loves cinema. 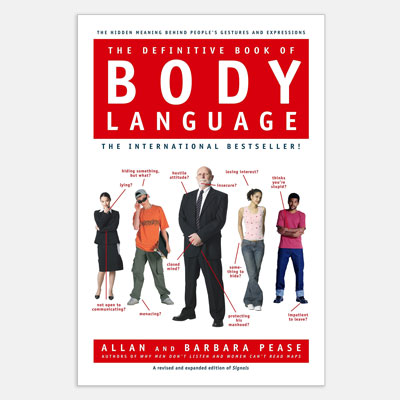 The Definitive Book of Body Language: The Hidden Meaning Behind People's Gestures and Expressions Hardcover – Illustrated - Amazon.com View on Amazon

Good acting requires a professional to convince the audience that he is not playing a part, that he is who he’s trying to portray. That requires getting in the mind of the character they’re trying to play. It also requires you to look that part. You have to learn how to move like the character would.

The Definitive Book of Body Language is a useful guide on learning how us humans move and what those movements mean. Any actor serious about their craft can use the knowledge they learn from the book into their roles. An unique yet useful gift idea for actors. 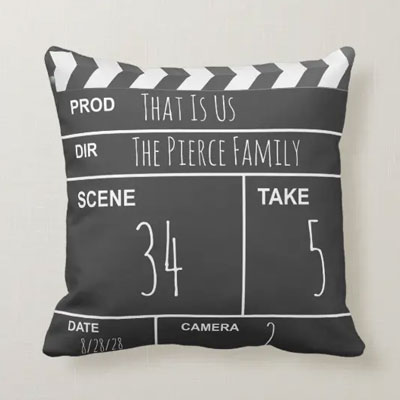 A movie actor’s working life is spent on the sets, trying to give the best performance they can and that involves a lots of takes. David Fincher, one of the most talented filmmakers working in Hollywood today, is notorious for wearing his actors out with dozens of takes until he gets his ideal shot.

If you’re looking a gift for a movie actor that they’ll find endearing, this custom clapboard pillow will do the work. It’ll remind them of the place they feel like they belong, the set. There’s nothing more charming than a thoughtful gift that lets the recipient know you appreciate their passion. You can also gift this to a screenwriter, cinematographer or anyone else who works on a movie set.

This gift guide brings you a collection of impressive gift ideas for youtubers. The best gifts for any...

A list of awesome gift ideas for guitar players in your life. This gift guide includes the best gifts ...

This gift guide brings you the best collection of gift ideas for aspiring and professional writers. Th...