Personally I’m not a big fan of Dinosaurs. They’re fine creatures and all but I don’t think we’ll get along if they were around. I don’t like things that can eat me.

Dinosaurs walked the earth for millions of years until an asteroid drove them to extinction. Which is kind of sad but not really since it allowed mammals to grow and for us to exist.

I’m a fan of dinosaur films though. I loved Jurassic Park (The first one). Maybe one day they’ll have the technology to bring them back into existence. And we’ll see how it goes.

Meanwhile this is a list of some great gifts for people who like the O.G. inhabitants of this planet. 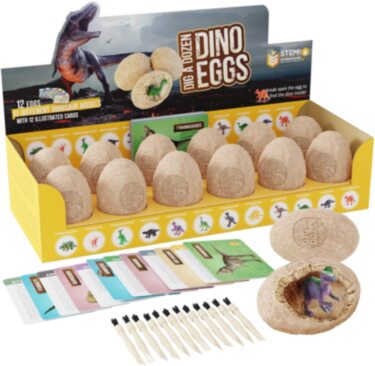 I think it was movies like Jurassic Park that made digging earth for skeletons look cool and so millions of kids around the world considered it as a career. Of course most dropped that idea when they realized most of the job includes boring stuff that doesn’t look fun.

Anyway, this is a fun gift for kids who like dinosaurs. 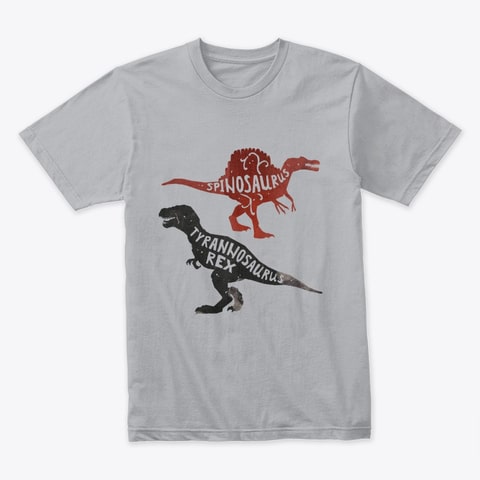 A cool looking T-shirt of adults who like dinosaurs for some reason. Because of course every adult person needs to own at least one piece of clothing with a T-rex printed on it.

Of course since I’m all about equality and T-rex gets the most publicity among all dinos, I’ve put in the Spinosaurus in the design. Just so they feel included. 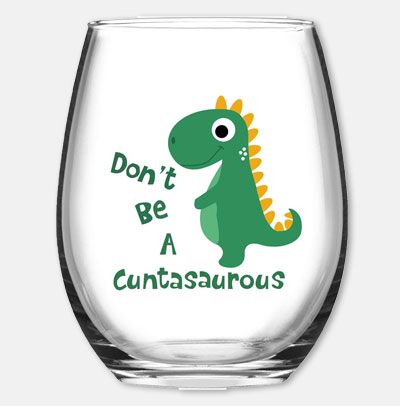 A funny wine glass meme is worth a thousand words. This message sums up my thoughts about people who are full of themselves and think they’re special.

We need more things like these in the world. Your dinosaur loving friend will get a good laugh out of these. Of course I won’t recommend this for recovering alcoholics. This glass makes you want to use it. 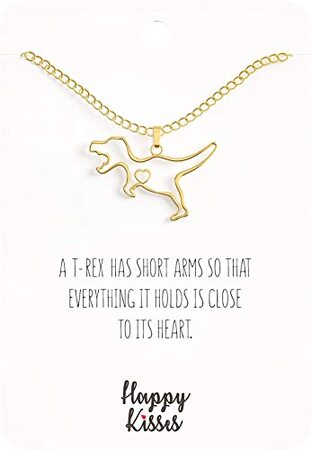 I’ve always wondered why T-rexes have those tiny arms. They seem like they’re just for show. Reading this it all makes sense. My thanks to the geniuses who made this necklace. They’ve made a great contribution to the scientific community.

Anyway, this is an ideal gift for a lady friend who likes dinosaurs. 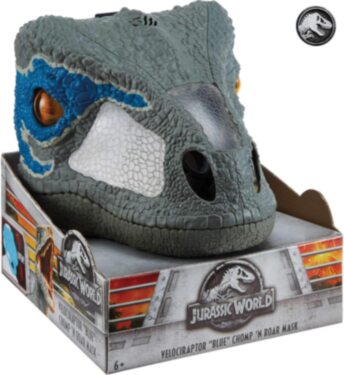 I don’t care if your parents said you can be who you want to be. Not everyone can become batman or spiderman and fight crime. Some just want to put on that Velociraptor mask and scare their little siblings. And that’s ok.

Here’s a fun gift for kids who like dinosaurs. Especially the Jurassic Park fans who know the superiority of Velociraptors. A good choice for raptor supremacists in your life. 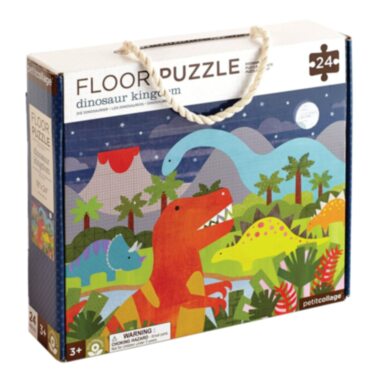 There are legit scientists trying to solve the puzzles of the existence of dinosaurs trying to learn more about our long extinct planet-mates.

But for those who don’t want to commit their lives to all that this is a fun puzzle. An ideal gift for kids fascinated by dinos. 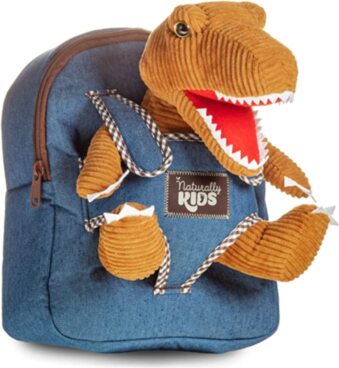 Those teddy bear backpacks are for little kids. This toddler backpack is for the cool little kids who are not easily scared. I’m sure the sight of this will make some child cry. But who cares? They need to toughen up and prepare for life.

That may sound harsh but I’m a realist. If your tiny recipient shows specific interest in his dinosaur toys, they’ll like this. 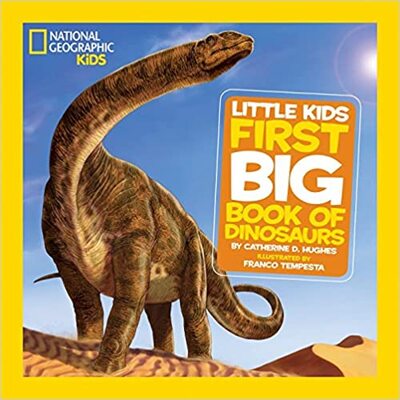 We’re living in a time where the most anyone reads is a tweet by angry, wannabe activists trying to change the world. And I doubt that’s going to change, but that’s not an excuse for not trying to get the future generations to get interested in books.

Having pictures in them doesn’t hurt. This book by National Geographic is a great way for future paleontologists to start their education. At the very least they’ll have topics to discuss with their nerdy friends. 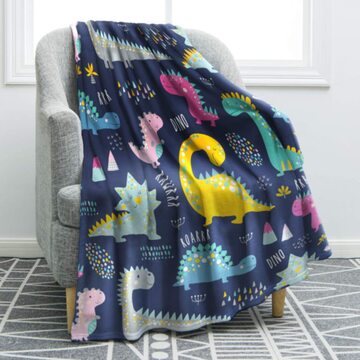 This is a no brainer. People love beautiful things. And this blanket is that.

Any kid will love the harmless, cute looking dinosaurs print on his blanket. Although don’t find one with actual Jurassic graphics. You don’t want to give them nightmares. The parents will hate you. This on the other hand is nightmare free. A fine present. 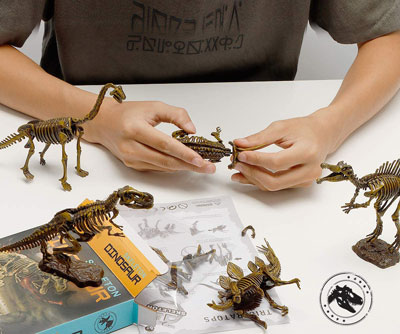 When I was a kid I used to take things apart mostly out of curiosity on how they worked. This obviously annoyed my parents since sometimes I couldn’t put them back together.

If your recipient is like me, they’ll love this toy skeleton assembly set. After all G.I.Joes are for kids. Big boys play with Dino bones. 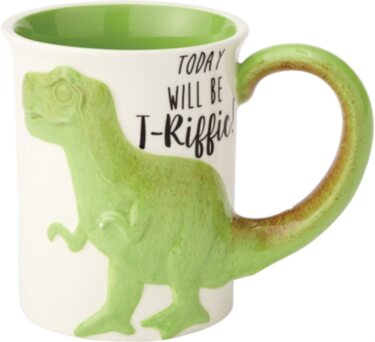 We can all benefit from starting our days with an optimistic message, even if it’s a dino pun. That and some coffee will give your recipient the boost they need.

If you’re looking for a gift for a dinosaur loving, coffee addict adult this is a fun choice. 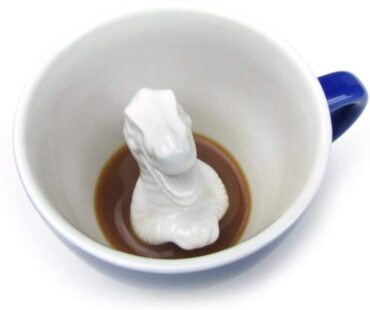 Another mug in the list because I haven’t forgotten about the tea drinkers. They need to be included too. We don’t discriminate based on beverage preferences. Although people who drink green tea should be discriminated against. I have no love for them.

A cool mug for your T-rex loving person. 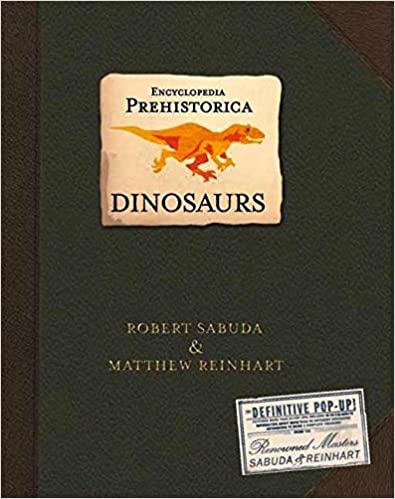 In case scientists are able to bring dinosaurs back to existence, I think we need some people to be experts on the subject. Know your enemy, they say.

This encyclopedia has all the knowledge you need about dinosaurs. Fascinating facts about the history of these creatures some will find interesting. You can gift this to people who like to read. 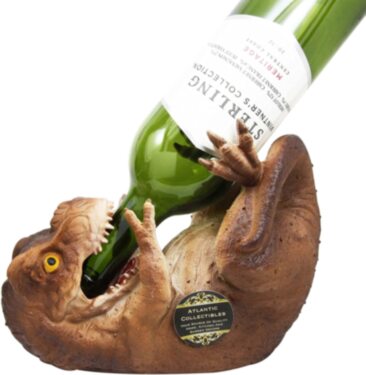 I don’t drink much wine but when I do I make sure I snatch it away from a T-rex’s mouth. I’m empathetic to their plight. After all I’d need a drink too if my entire species got eradicated by an asteroid but I have my own problems.

This is a charming gift for any wine drinking person who likes dinosaurs. 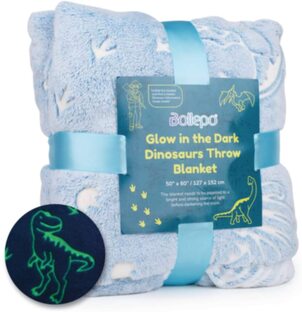 We all love things that glow, like stars and fireflies and bleached smiles.

Well, this blanket with dino shaped cutouts glows in the dark, like hope. Who wouldn’t love to have one of these. People who are consumed by darkness, I guess. There’s nothing you can do about that. For everyone else this will make a fine present. 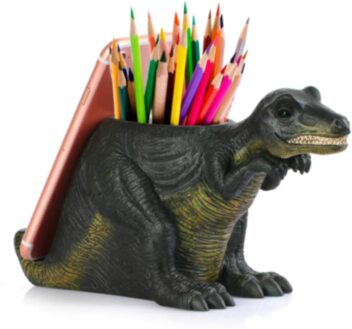 You know you’re a dominant species when you can make things shaped like other species on your planet just to hold your stuff.

I’m sure someday when aliens invade us they’ll have human shaped pencil holders.

Anyway, this pencil holder is an ideal gift for students who think dinosaurs are cute. 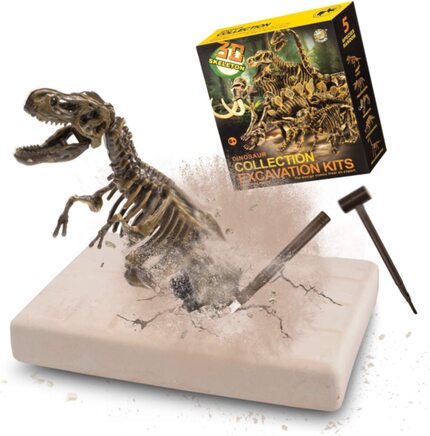 Everybody loves surprises. There is something about not knowing the outcome of everything, the uncertainty that touches our emotions. It’s like a high of sorts. Not everything in life is supposed to be predictable. That’s why people love the act of unwrapping their gifts.

This toy kit has that element. You strike, excavate, sweep and discover which dinosaur skeleton you’ll find. A fun gift for kids. 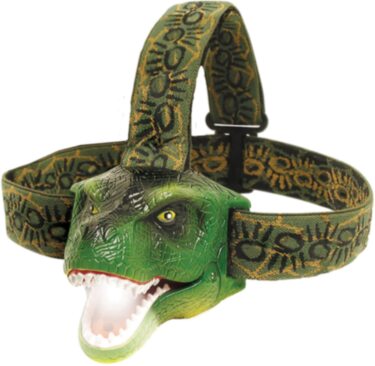 As far as head lamps go, this is probably the scariest looking headlamp I’ve seen. I imagine how’d it be to see a tiny T-rex head in the dark with light coming out of its mouth when you’re tripping. Sounds not fun. This is what nightmares are made of.

Kidding aside. It’s a cool head lamp perfect for kids who like dinosaurs. 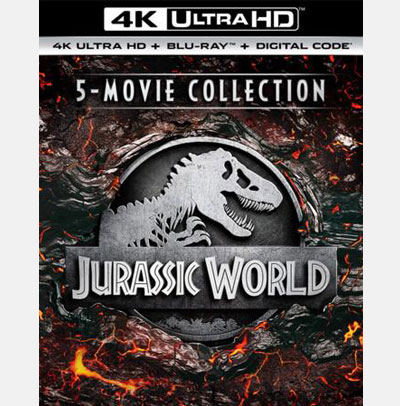 I like the Jurassic Park movies. The original trilogy was directed by Steven Speilberg. The second one was not great but still fun to watch. I like having movie marathons with my friends.

You can gift this Jurassic Park movie collection to a dinosaur lover who also likes the films. They’ll love to own the set. 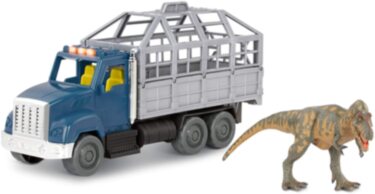 Another cool toy for kids who like dinosaur toys. The truck looks realistic and the T-rex actually growls. Sounds like fun to play with.

I’m sure PETA will be very offended with this, but how else are you going to transport a T-rex? 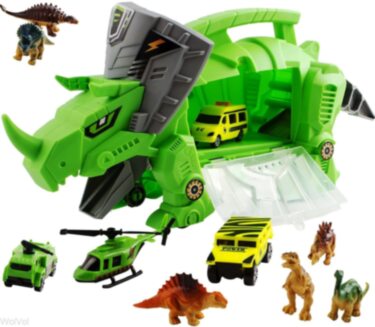 Ask any parent and they’ll tell what a nuisance it is toys lying around on the floor. The floors are for walking.

This dino storage carrier is so cool that it’ll make the kids want to use it. They can put the small toys inside of it. It has a handle for you to carry it around like a dinosaur shaped suitcase. 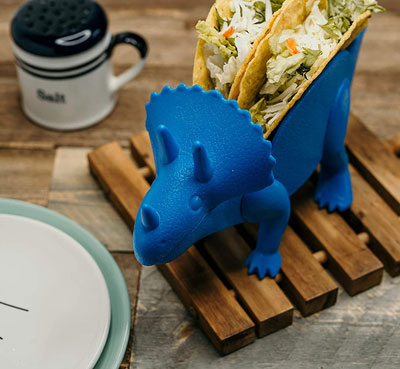 Hold my taco while I convince you why you should buy this. Well, you don’t have to because I have since I got my own taco holder to hold it for me. See what I did there?

The truth of the universe is you can’t put your taco on a plate, you need a taco holder. A dino shaped taco holder is perfect for any taco eating person who loves dinosaurs. 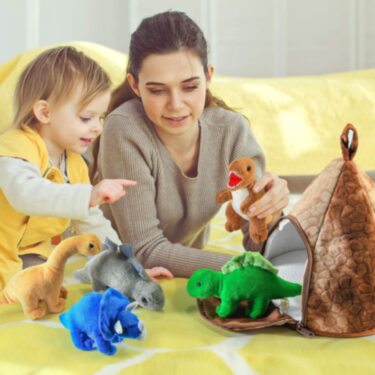 To my disappointment this isn’t a miniature volcano that blows out holographic lava with mini robotic dinosaurs running out of it. That would have been cool.

This is just a cute little volcano house with little plush dinosaurs for kids. Which is more appropriate for that age I guess. A good gift for toddlers. 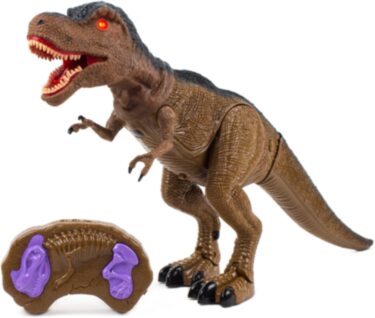 Why didn’t I have this when I was a kid? I would have loved to own a toy remote control T-rex with led lights for eyes. It’s not really fair that I had to settle for remote control cars. Although they were pretty cool too. Just not as cool as this.

An awesome gift for kids who love dinosaurs, especially young T-rex fans out there. 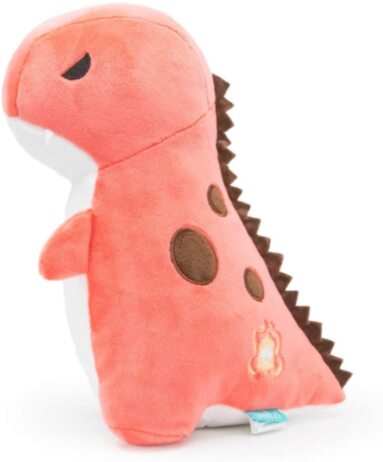 I don’t know why but this T-rex looks grumpy. Maybe it’s mad about those tiny arms. I would be too if I had arms like that.

A plush T-rex toy for kids to play with. A cute present for your cute recipient. 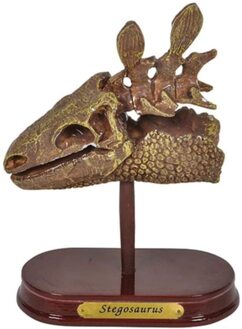 Another excavation kit I had to include in the list. This is a bit different though. It’s not just a ready for assembly mini skeleton like the others, you can dig out a stegosaurus skull out of a pretend stone.

And after you’re done you can use it as a fine showpiece. Ideal for kids and even nerdy adults.

This is a great collection of gift ideas for Donald Trump supporters. Really, the best ever presents, ...